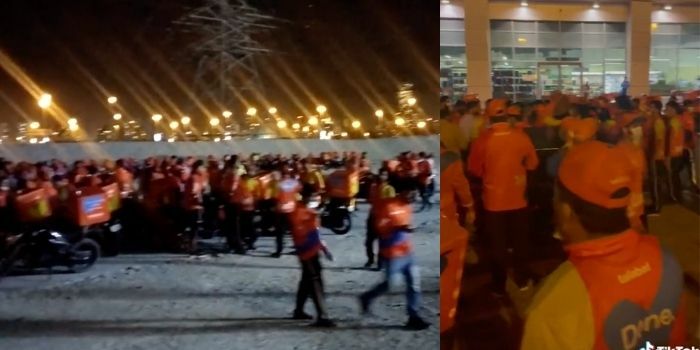 Overnight, Lovin received DMs from a number of people reporting their food was not delivered. Riders were refusing to work, as they push for an increase in per order rate, among other requests.

Talabat has shared the strike tactics the drivers used with Lovin Dubai, which included ‘dividing themselves into groups per zone as well as using online tactics “stayinyourroom”- signing up for a shift but not showing up – and preventing others to do the same’.

The Talabat fleet of drivers work with third-party logistics companies, Talabat has 20,000 drivers in the UAE and from what we’ve seen on social media, it appears a lot less were involved in the strikes which began last night.

Riders are pushing for an increase to AED9.5 per order rate, up from AED7.50

Talabat has issued a statement outlining its earning model and incentives for drivers, noting, in particular, that there has been no change to its earning structure in six months

We are committed to ensuring riders can continue to rely on our platform to provide for their families having decent stable gross monthly earnings of around 3500 AED on average. Until last week rider pay satisfaction was well above 70%, and we haven’t updated our payment model recently. We understand economic and political realities are changing constantly, and we will always continue to listen to what riders have to say.

On background – we do not believe this is a constructive way to ask for improvements, and it is something that we strongly oppose, not to mention that it goes against the regulations of the UAE.