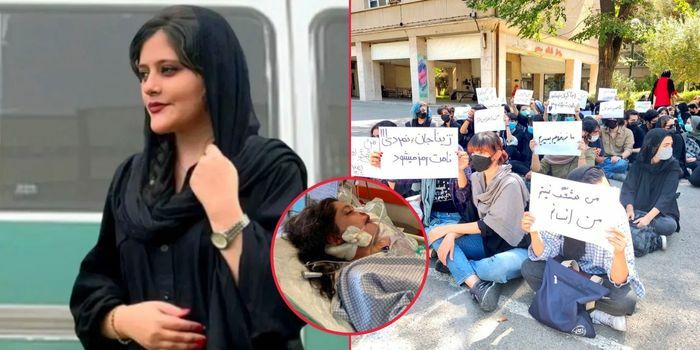 Protests have erupted in Iran following the death of 22-year-old Mahsa Amini who passed away while under the custody of Iran’s moral police.

Mahsa was a Kurdish woman who was visiting Tehran with her brother when the Morality Police arrested her on September 13 for allegedly breaking a law that requires women to be fully covered in loose clothing with a hijab or headscarf wrapped around their head.

After being in a coma for 3 days, Mahsa Amini passed away on September 16 while still under the custody of Iran’s Morality Police.

The police however have denied any responsibility for the death and claim that she passed away from a heart attack, a claim that has been refuted by Mahsa’s family, who say she was perfectly healthy.

Mahsa Amini, 22, is in a coma after being tortured by Iranian authorities.

This would be unacceptable no matter what, but the fact that she was arrested for improper wearing of the hijab makes it even more horrifying.

Please join me in sharing her name and story.#مهسا_امینی pic.twitter.com/FEB6BYfIZO

Following Amini’s death, protests have erupted around the world in support of women’s right to choose their own attire

Across the globe, women have been cutting their hair to show their support for the women in Iran. The protest has been ongoing and is still happening today with the hashtags #mahsaamini and #مهسا_امینی

Nasibe Samsaei, an Iranian woman living in Turkey, cuts her hair during the Istanbul protest.

In Iran, women are removing their hijabs in solidarity, and have walked out on the streets chanting slogans against the current government.

This video from Saghez, Iran

Brave women in Saghez, Iran, risked punishment by authorities by removing their headscarves in protest against the murder of the 22-Year-old woman #MahsaAmini by hijab police, and chanted “death to the dictator.”

Lionesses, each and every one! https://t.co/ME0g8yFxfq

Women are also burning their veils in retaliation.

This is the real #Iran. Compulsory hejab is not part of our culture. #IranProtests #Mahsa_Amini #مهسا_امینی pic.twitter.com/3bLS5pTtzf

Scenes from Oshnavieh, which has reportedly been overtaken by protestors

A Kurdish town in Western Iran with a population of over 40,000.

#IranRevolution: Oshnavieh is free! The city is completely under the control of protesters, and all security forces retreated. #MahsaAmini

Protests in the country’s capital, Tehran

This is Tehran capital of Iran. The murdering of #MahsaAmini Became a turning point for women of Iran. Hijab Police killed Mahsa because a little bit of her hair was visible. Now she became a symbol of resistance for women to take their disability back.#مهسا_امینی pic.twitter.com/SDlYXbEJt4

This video of an old lady in Rasht, Nothern Iran walking through the streets after removing her veil has been doing rounds on social media

She can also be heard chanting the slogan, “death to Khamenei”

An old lady, with head uncovered, walks through the city of Rasht in northern #Iran chanting “death to Khamenei.”pic.twitter.com/WfNow9ZR8Z

In response, the Iranian government has shut off the internet and social media apps to curb protests

Although they have partially restored connections after receiving backlash, where several people began to trend the hashtag #KeepItOn.

CEO of Tesla Inc, Elon Musk has activated Starlink in the region in support of protesters.

After a partial #Internet disruption between 0900-1000 UTC, a third full shutdown has been observed in #Iran, with Rightel, MCI, and Irancell all losing connectivity starting at 1215 UTC, as seen in @Cloudflare traffic data.https://t.co/US8Xss8SeB#KeepItOn #IranProtests2022 pic.twitter.com/BNzOAAw4FN

DISCLAIMER: Please note that protests are illegal in the UAE. For an assembly to be legal, official permission must first be taken from the government.

“If an assembly of individuals endangers public peace by the individuals’ participation in demonstrations and/or protests, and where such gathering refuses to disperse even when it is ordered by the police, then the participation of an individual in such a demonstration, protest or public gathering may be considered an offence in accordance with Article 197 (1) of the Federal Law No. (3) of 1987 on the Issuance of the Penal Code.”