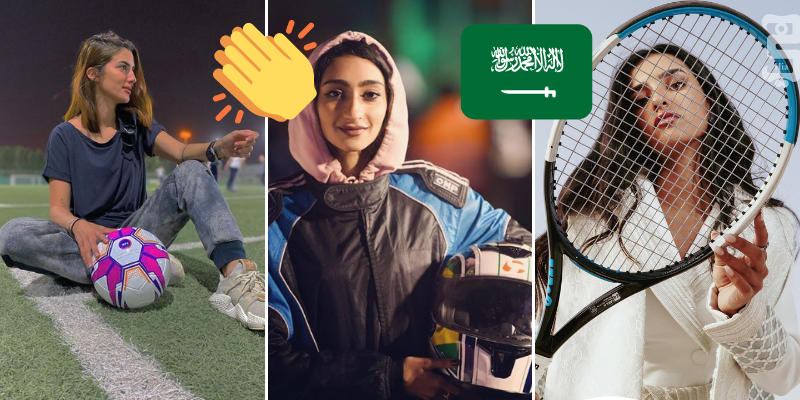 From being featured on magazine covers, from pioneering women into racing while being the coolest interior designer, these women will truly inspire you to excel and also take pride in their accomplishments! Scroll through to see five iconic names that have outshined in the Kingdom for their individualistic achievements, persona, and determination.

Raha is known as the youngest Arab woman, and first Saudi woman to climb Mount Everest! This dedicated climber has also climbed the seven summits, tackling the tallest mountains of each continent. Raha has gotten insanelty famous since then and has partnered up with big names like Adidas, Panadol, and even Tag Heuer! Check her page out to witness her amazing blogging skills and adventures.

This football player totally broke a Guiness World Record, by completing a match at the highest altitude recorded, on Mount Kilimanjaro. Apart from this unique record, Saja also holds two other world records, showcased in the Guiness Book of World Records 2022. Saja is also the brand ambassador for CORE, a luxury fitness club based in Riyadh. When she’s not breaking records, Saja is posting amazing pictures of her adventures around the Kingdom.

This icon won third place in the Kingdom’s first Women’s Karting Championship held in Jeddah back in 2018. She is also a very talented architect that specializes in circuitry and sports buildings. Lamya was also the first female drifter to participate in Junadrya Riyadh, one of the longest nentertainment motors show that included bikes and cars.

This racer is not only a board member of the Saudi Arabian Motor Federation, but also the International Automobile Federation. When she’s not racing, Aseel is actually an interior designer and founder of idegree Design. She is also a huge supporter for women in the automotive industry, and has immense support from women looking to follow their dreams, like Aseel.

This teenager is doing quite a lot. When she’s not making big wins in tennis, she’s modeling on A-list magazine covers, including Vogue Arabia! Yara is known as the first Saudi woman tennis player, and is actually just 17 years old.The young talent was also the first Saudi female tennis player to enter the ITF ranking! This girl has done A LOT at just the age of 17, and Saudi is proud of her for it!