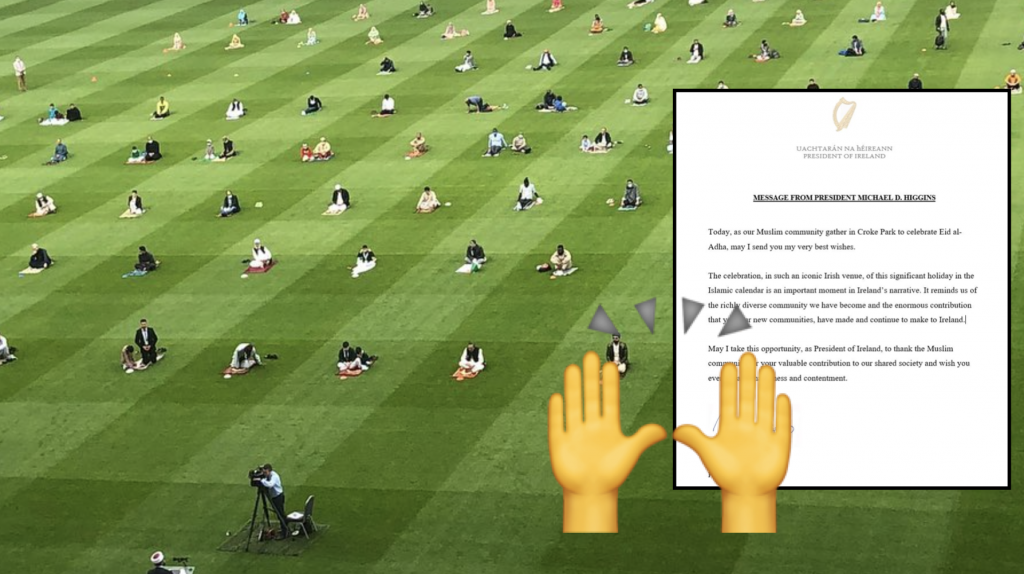 An Irish football stadium opened up for Muslims to celebrate a socially distanced Eid Al-Adha and the footage is going viral.

Croke Park, the home of Gaelic football in Ireland, invited 200 Muslims to perform Eid prayer and the move has been praised by the Islamic community in Ireland and beyond for sending a message of welcome and promoting a shared society to the world.

Croke Park is the country’s largest sporting arena, with a capacity for 82,000 supporters and this is the first time the park was used for Muslim prayer. Due to COVID regulations, prayers at mosques were not possible, which lead Shaykh Umar Al-Qadri, the chair of Irish Muslim Peace and Integration Council to reach out and ask for the space.

‘This is Ireland’ – Irish Twitter is proud of the historic move

What a moment!. @officialgaa opens its historical @CrokePark for Muslims to celebrate and pray in #EidAladha2020. This is Ireland, the accepting, the tolerant, the diverse and the beautiful homeland and for all. #عيد_الاضحى pic.twitter.com/ty3cxYO9RF

A mix of faiths attended the historic day, the first of its kind in the history of the park, and the Irish President Michael D. Higgins sent best wishes and praised the gesture

Message from President Higgins sent to our muslim community who gathered today in Croke Park for Eid Al Adha. pic.twitter.com/u0dTMkP7SI

Shaykh Umar Al-Qadri, the chair of Irish Muslim Peace and Integration Council thanked Ireland for sending an important message to the world

The idea originated in Germany, where Muslims congregated in a large IKEA car park for prayer

Shaykh Umar Al-Qadri took inspiration from prayers in Germany, he went one step further by looking for permission from Croke Park, who ‘didn’t hesitate’ to grant access.

They didn't have space, so they asked an @IKEA if they could use their empty car park.