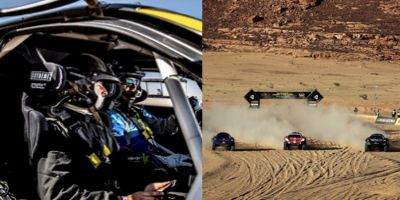 The inaugural Extreme E “Desert X Prix” is currently taking place and a part of it is happening right here – across Saudi deserts.

Extreme E is an international off-road racing series that uses spec electric SUVs to race in remote parts of the world, such as the Amazon rainforest or the Arctic

The idea is that the race features electric SUVs competing across the Saudi desert landscape — the first of five taking place around the world in extreme environments already damaged or affected by climate and environmental issues.

Saturday saw the first-ever races of the electric SUV series with the qualifying rounds, while Sunday will see the two semi-finals and final.

The challenging, high-speed 8.8km track layout — laid out in the midst of a breathtaking otherworldly landscape — was designed to push drivers and cars absolutely to their limits.

The opening day of the Desert X Prix saw some jaw-dropping competition and a sensational scrap to top the qualifying timesheets — one ultimately won by X44 duo Sébastien Loeb and Cristina Gutiérrez.