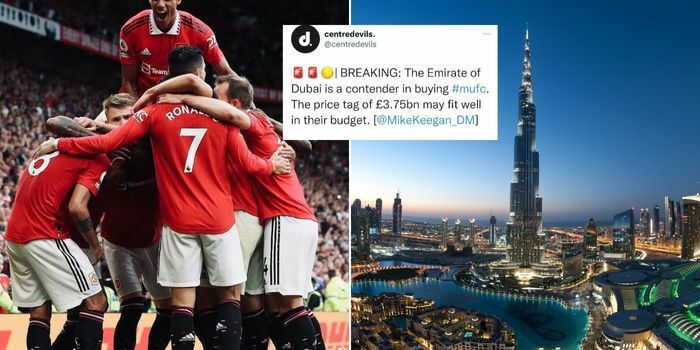 After a solid 3-1 victory over Arsenal last night, Manchester United fans have much to celebrate.

But it looks like Manchester United owners, the Glazer family, have bigger fish to fry after close sources say they’ve put a price tag on the storied club. According to the Daily Mail, the Glazers say the club is worth £3.75 BILLION, and reports suggest there are interested parties, including one of Britain’s richest men and a Dubai wealth fund.

What we know so far:

Reports in August suggested a minority share of Manchester United would be sold but it now looks like the owners might be willing to part ways with an entirety of the club… at a price.

A number of news outlets say Dubai’s sovereign wealth fund, the Investment Corporation of Dubai (ICD) could be interested in ownership of the club

‘Well-placed sources’ confirmed the price tag, according to the Daily Mail which also confirmed Dubai as a rumoured contender to take ownership of the club, although there has been no official confirmation on either side. The move would see Dubai following in the footsteps of Abu Dhabi which owns Manchester City and Saudi’s Public Investment Fund which owns Newcastle United.

The news comes at a time when some fans are encouraging a Glazer’s departure, through protests and an online hashtag #GlazersOut. The news that the Glazers have named their price will be music to the ears of some fans.

If Dubai buys @ManUtd , best believe I will choose that city as my go-to holiday destination every year for the foreseeable future!! #Dubai #ManchesterUnited

Jim Ratcliffe is one of Britain’s richest men.

Rumors about that Dubai wants to buy Manchester United #GlazersOut