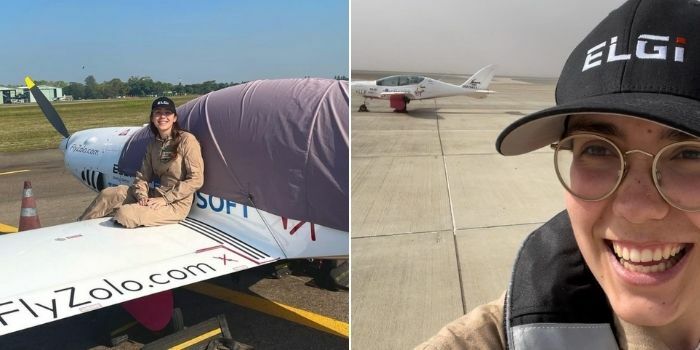 Zara Rutherford, a 19-year-old Belgian pilot, who is currently attempting to break a Guinness World Record for flying solo around the world in a microlight plane made a pit stop to Expo 2020expo this week.

What do you recall doing at the young age of 19?

For most of us, perhaps it’s not flying planes across the planet but Rutherford kickstarted this journey just a few months back, when she headed west from Belgium in August 2021.

The teen pilot wants to break the Guinness World Record of flying across the world, solo, and in a microlight plane

Zara has also been documenting her entire journey, since inception, in an Instagram account wittily named ‘Fly Zolo’

If she succeeds, she’s also set to be the youngest woman ever to fly solo around the world

…along with the title of being the youngest person to fly solo around the world in a microlight airplane.

To break the world record, there are a couple of requirements needed to complete by Rutherford

First, is that she carries no passengers along the way and to have cross through two antipodal points, or countries that are diametrically opposed to one another.

Speaking to The National, the young pilot stated her choice of Colombia and Indonesia.

The current record-holder of the same title, Shaesta Waez, achieved this at the age of 30 back in 2017 when she completed Dreams Soar around-the-world flight in a single-engine aircraft.

Good luck to you, Zara!