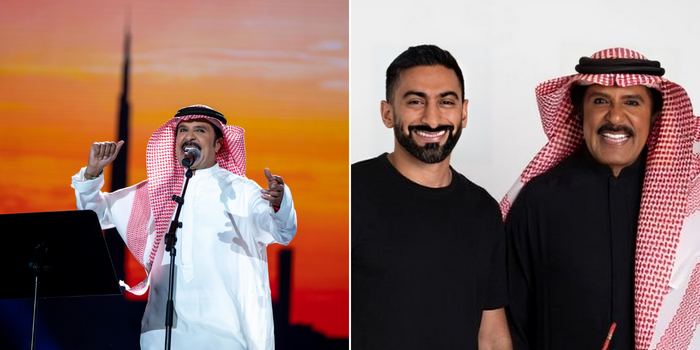 Everyone knows the one and only Emirati singer Abdullah Bilkhair for his amazing voice and the positive energy that he gives off. You might think that Bilkhair would reveal the emotional, unhappy side of him on the latest #ABtalks episode on YouTube hosted by Anas Bukhash – but you’re wrong! Throughout the interview, his smile did not leave his face, regardless of how gloomy Anas’ questions were. Let’s explore some of the main takeaways from the conversation.

Being the unique and colorful figure that he is, Bilkhair shared his royal background, how he began his successful career, and how he does not let grief get into him

“I am a person who suddenly found himself in a house of Sheikhs” (WATCH at 6:08)

Being an individual surrounded by Sheikhs all over, Bilkhair had to copy their actions and they supervised it. “Their upbringing was about etiquettes, rights, listening, then welcoming and greeting people with kisses from all walks of life any day,” he said. The Sheikhs take good care of Bilkhair to this day. He believes he’s a person who received opportunities that no one has received.

Abdullah’s father was not fully present during his childhood

Abdullah’s father had gone to Kuwait for work and remained there for a long time during his childhood (18:24). Abdullah shared a funny anecdote during the interview and said “people call me Bilkhair, my father was also called Bilkhair. So whenever I was with him they all said ‘Bilkhair’ – my father would be startled, ‘Did someone call me?’ – and I would say, ‘they meant me not you.’ THAT’S HILARIOUS!

Despite the cultural stigma at the time, Bilkhair went ahead and studied music

Bilkhair elaborated that at the time, the options were very limited – being ‘literature’ and ‘science’. When he approached the ministry, he told them that he wants to study music. In response, the ministry thought it was a joke and did not take him seriously, saying “it’s not available, we do not have any contact with them”. After many nags from Bilkhair, the ministry had one condition for him to pursue music, “if you bring an acceptance letter from any music institutes, we might consider it.” He then traveled to Cairo and got accepted to be in a choir. Currently, Abdullah Bilkhair is one of the most famous Emirati singers in the region. THIS IS THE TRUE DEFINITION OF FOLLOWING YOUR DREAM NO MATTER WHAT!

Bilkhair further explained by sharing a story that happened with him in London. The Sheikhs told him “do not wear your traditional clothes, wear a normal outfit so people will not recognize you and make a scene – let them think you’re just a tourist.” Bilkhair walked from Knightsbridge until Harrods and could not tolerate himself not being in the spotlight. “It weighed on me so I went back home, wore a kandoura, and went out again – and it felt like life returned to me,” he said.

As much as Bilkhair never fails to spread his positive energy, does he ever experience grief?

“I have never experienced depression, there is no space for it to slip in,” he said. Whenever Bilkhair feels like there’s a chance for him to be sad, he automatically switches it up by reading, learning, or watching something to accomplish something rather than feeling like a failure. Like any other human being, he experienced grief when he lost his parents and his loved ones – but other than that, not really. He believes that he does not know what the future holds and that the past is gone. WE ALL WISH WE HAD HIS MINDSET, RIGHT?

The audience loved Bilkhair’s aura from the beginning – and how he’s so protective towards his inner peace!

The conversation was full of laughter and the audience adored it!

Anas Bukhash, a serial entrepreneur and interviewer, sat down for a candid chat with Abdullah Bilkhair for the latest episode of his admired show #ABtalks. This light-hearted, happy interview was ‘Chapter 117′, which came after Anas had previously thrown light on well-known figures’ raw sides.