A fire broke out in Marina Diamond 2 building at 4AM on Saturday. The Dubai Civil Defense were on the scene, escorting residents out of the building safely and was putting out the fire.

Residents from neighbouring buildings heard the sirens and went out to their balconies to see police cars blocking vehicles from entering the road, multiple fire trucks, 2 huge crane extinguishers, ambulances, and more. Parts of the structure were ablaze and falling onto the ground.

A resident @djlins, stated that the fire started from the same floor her apartment is on and confirmed that authorities evacuated everyone from each apartment. She also stated that everyone was fast asleep and the fire alarms hadn’t gone off so residents weren’t aware of the fire. 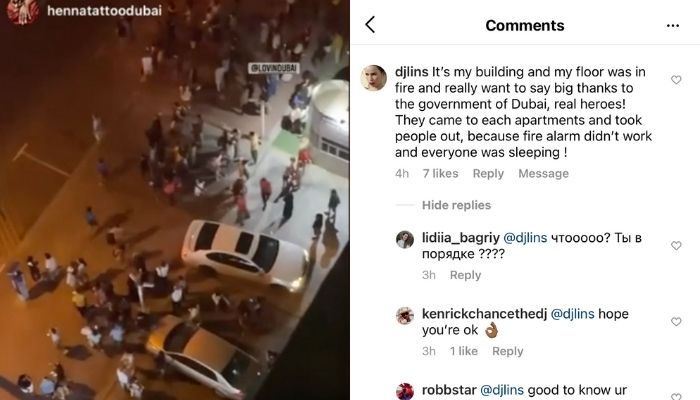 The fire was put successfully put out, no casualties were reported and the Dubai Civil Defense handed out water and juices to residents

The fire had started around 4AM and was successfully put out at approximately 5:30AM. The residents stood outside the building on the pavement as the Dubai Civil Defense team handed out water and juices. Thankfully no injuries were reported!