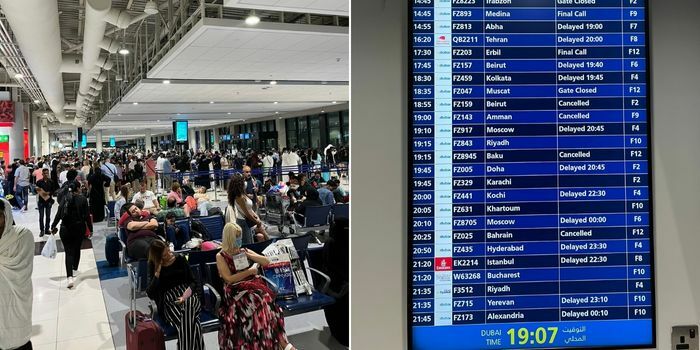 The weather has been the kind that you would shut out with curtains because it’s not such a pretty sight. It’s been all sort of sand and dust, reducing the visibility that residents couldn’t see the Burj Khalifa or the person standing right next to them.

Flights of course were affected by this that over 10 flights were redirected, some were postponed and some were just cancelled.

@DubaiAirports due the bad weather conditions please share with the clients how many flight will be delayed and what u can advice for ur client .

@EmiratesSupport horrendous experience here at @DubaiAirports flight delayed by 5 and a half hours and counting…keep moving the delay time by an hour…no communication from staff at all. Feeling very ignored. Not good enough.

@EmiratesSupport @emirates I am still waiting to hear back from emirates support on rebook for my cancelled flight from hyd to dbx..

@EmiratesSupport #ek0020 (Man to Dubai) was delayed yesterday. Passengers left standing for five hours straight. No seats, or snacks, offered. Senior citizens, babies and passengers (with hidden disabilities) were not supported. Hotels were not confirmed until after 5 hours. #sad

@EmiratesSupport my flight has been cancelled to Dubai from Manchester until tomorrow due to a sandstorm. The communication from Emirates staff is truly appalling! We are currently stood in an extremely long queue……no idea where we are going….nobody has bothered to tell us!

If in their hub Dubai airport this is their ability to manage things, they should stop operations

Dubai International Airport is recovering after 2 days of disruptive weather

From August 14 until August 15, 44 flights have been cancelled and 12 were diverted to DWC.