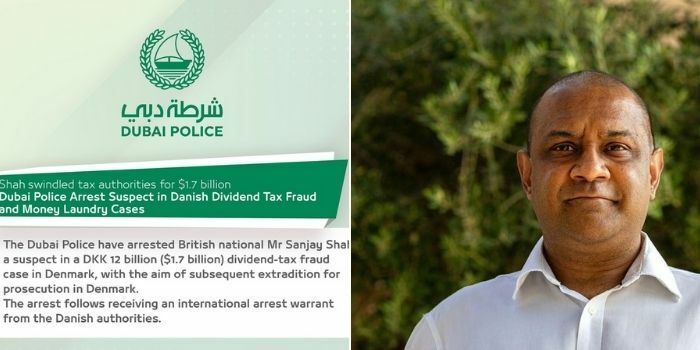 Dubai Police arrested Sanjay Shaw, a hedge fund trader, who is the main suspect in a tax fraud and money laundering case in Denmark, worth over US $1.7 billion or over AED6.2 billion.

Dubai Police stated it received a red warrant to arrest Shah for extradition back to Denmark.

The arrest came after close cooperation between the UAE and Denmark under a bilateral extradition treaty that was signed in March 2022.

According to Gulf News, the 52-year-old is said to be the mastermind of a scam called the ‘cum-ex’ trading, that housed a global network of bankers, lawyers and agents who illegally sought refunds on dividend taxes that were never paid by them, and on stocks that were never owned.

Major General Khalil Ibrahim Al Mansouri, Assistant Commander-in-Chief for Criminal Investigation Affairs, Dubai Police, also said that after the exchange of information with Danish authorities, a task force was initiated by Dubai Police to look into, gather evidence and track Shah’s movements in the country.

“A team from the Wanted Persons Department and the Anti-Money Laundering Department put Shah under surveillance until he was arrested,” Maj. Gen. Al Mansouri said.