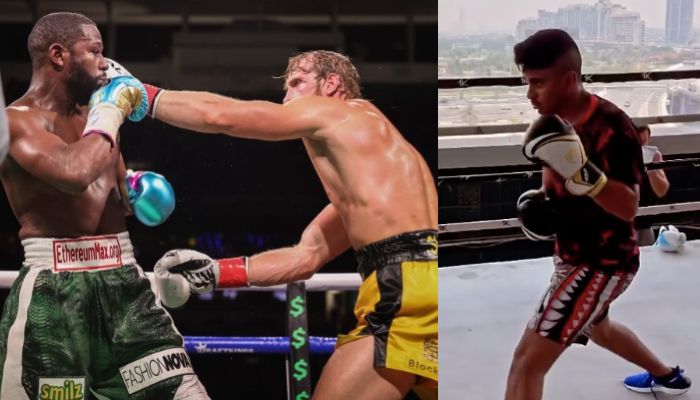 Famous YouTuber and boxer Logan Paul went head to head with American professional boxing promoter and former professional boxer, Floyd Mayweather on June 6. It was a nail-biter to say the least. The Paul vs Mayweather was 8 rounds and they both held up extremely well. The fight was meant to take place in Dubai and a law suit was issued when that didn’t happen.

Dubai has become a hub for boxing which is just AMAZING for us fans, with professional boxers flying to this city to get in the rings. An Emirati influencer got his gloves on in a recent Instagram video and we’re here for it. Rashed Saif Belhasa, aka Money Kicks got in the RING!

With all the boxing tournaments taking place in the city, it begs the question, is it time for an influencer boxing fight in Dubai?

In case you haven’t heard, the Paul vs Mayweather fight was supposed to take place in Dubai

Logan Paul only boxed once as a professional but Floyd Mayweather has boxed plenty and still holds the reign as an undefeated five-division champ.

Floyd Mayweather says that he made $30 million from the sponsorships on his shorts last night. pic.twitter.com/0xWraQVAIU

Money Kicks is starting his boxing career in Dubai

Famous Emirati YouTuber and entrepreneur, Money Kicks shared a video on his Instagram that you’ll love if you’re a fan of boxing. Okay that’s it, we have to have an influencer fight in Dubai, it’s only fair.

Listen To The Lovin Daily: Footage Of Dubai’s Illegal Balcony Photoshoot Is Being Auctioned