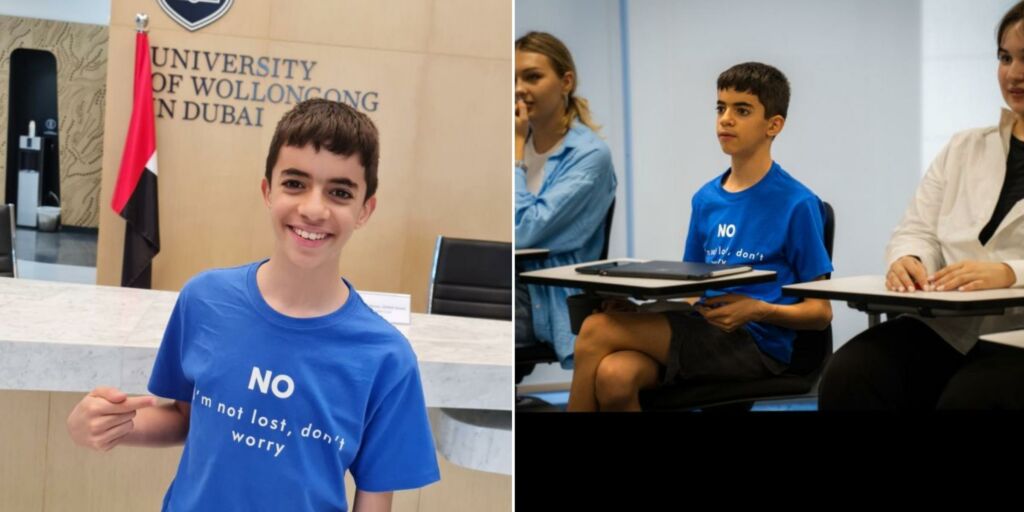 Adam El Rafey is just 12 years old but his aspirations go far beyond outer space. He just recently got accepted into Wollongong University in Dubai and will be starting his freshman year from this September. WHAT?!

So at the age where most of us are figuring out the point of adding letters in mathematics, Adam is already out conquering the world.

“Ability Not Age”: Adam is believed to be the youngest person in the UAE to be accepted into university

Besides being a child prodigy, he also has a killer sense of humour. According to his post on LinkedIn, Adam went to his first lecture with a custom made shirt that reads, “NO I’m not lost, don’t worry!”, in case his fellow students were wondering what a middle-schooler was doing at their university.

Best of both worlds

Adam is studying media at university while simultaneously finishing Year 8 combined with Year 11 courses at his school, JESS Dubai. This is because he doesn’t want to “miss out on all the shenanigans” of his age group

So if you thought handling homework alongside one extracurricular was difficult, just imagine what it would be like to handle two school years alongside university *shivers*

It’s wonderful to see such young and ambitious talent out there. Kudos to Adam – the sky’s the limit!!