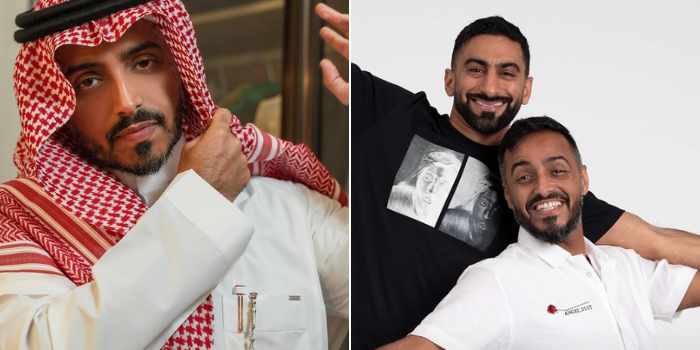 Recently, an hour-long interview with Tareq Al Harbi was aired on Anas Bukhash’s YouTube channel and gave us a deep insight into the personal life of Tareq, the social media icon. Tareq is famously funny, but there’s much more to learn about the behind-the-scenes of the comedian.

During the AB Talks interview, the real Tareq was revealed as he discussed his misplaced anger, fame, childhood, and the best & hardest moments of his life

When asked the famous question “How are you really doing?” he said, “I can answer that I have become angry” Al Harabi admitted that it makes him sad to see how easily anger can get towards him. He also emphasized that it’s new negativity that entered his life… AL HARABI, WE FEEL YOU!

“People are only expecting content, they do not know that I have a life” 30:28

It’s unlike the Saudi star to share a lot about his life, but he touched upon his love-hate relationship with fame. Al Harabi revealed that he used to enjoy coming up with a sketch, however, now, it’s considered business and work. He said, “What I have been through has been unbelievable, how can I think of a funny sketch?”

Al Harabi was the class clown from an early age

Being the hilarious icon that he is, Al Harabi was told to impersonate teachers to gain bonus points for his school grades, and his final score would change from ‘very good’ to ‘excellent’. WE ALL WISH WE HAD HIS TALENT, RIGHT?

Surprisingly, Al Harabi was overweight when he was younger, being 120 kgs and 155 cm. He managed to lose half of his weight by exercising… in ONLY A YEAR AND A HALF! HOW IMPRESSIVE!

Throughout the interview, Al Harabi got emotional and expressed the best and hardest moments of his life

The comedian confessed that the greatest bit of his life was when he was honored with the Sheikh Mohammed Bin Rashed’s prize as the best content creator back in 2017! 😍

On the other hand, one of the hardest moments was when one of Al Harabi’s partners stole 1 million riyals (almost 979,000 AED) from him (1:11:08). The partner took the money and disappeared to the U.S, and Al Harabi saw it as a long process to get the money back, so he didn’t bother. “It did not hit me hard, it was normal – I have a big notebook of how many times I lost money.”

Despite the seriousness in some moments, people still managed to love the interview!

The vulnerable, honest and deep conversation is seriously touching

Anas Bukhash, a ‘serial entrepreneur’ and interviewer, chatted with Saudi comedian Tareq Al Harabi for the latest episode of his popular program ‘#ABtalks.’ This tense interview was ‘Chapter 115,’ and it came after Anas had previously conducted interviews with some of the Middle East’s top figures.