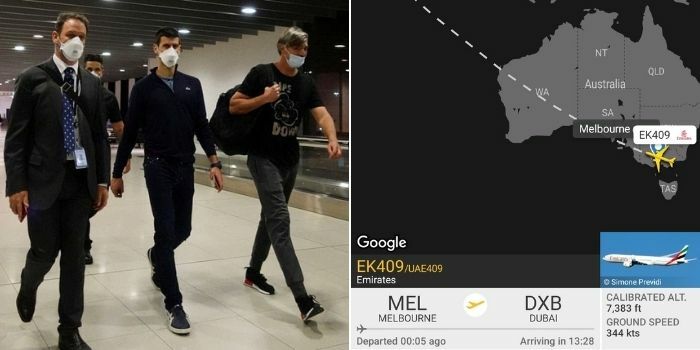 Novak Djokovic has been deported from Australia ahead of the Australian Open, an annually held tennis tournament. He sought to restore his visa, however, the court rejected his challenge to the decision of the Australian immigration minister, Alex Hawke, to cancel his visa.

You see, he had won the first appeal against the initial decision to cancel his visa at the border, but later overturning the government’s intervention was unsuccessful under the country’s Migrations Act.

He was detained for 10 days upon arrival in Melbourne after border forces proved his medical exemption against COVID-19 vaccination was insufficient.

Novak was on the Emirates flight leaving Melbourne at 10:30pm and will be arriving tomorrow at 5:30am

I’m pleased and grateful that the Judge overturned my visa cancellation. Despite all that has happened,I want to stay and try to compete @AustralianOpen
I remain focused on that. I flew here to play at one of the most important events we have in front of the amazing fans. 👇 pic.twitter.com/iJVbMfQ037

Some stood with and some stood against the tennis player. Others actually took to the streets of Melbourne, outside the Australian Open to protest.

After the ruling was declared, however, Novak faced immediate deportation and news sources reported that he’ll be on the 10:30pm (3:30pm UAE time) flight to Dubai.

Goodbye Novak Djokovic. You are a great tennis player… please come back to Australia when you’re double vaxxed against COVID. You’ll be most welcome. It’s not much to ask in a global pandemic which is killing millions and disrupting all hospital systems.

FlightTrader 24 on Twitter, which records and tracks air traffic in real-time, stated Novak’s flight is the most tracked flight

1 minute after turning on the transponder flight #EK409 is the most tracked flight on Flightradar24. Track #NovakDjokovic flight from Melbourne to Dubai athttps://t.co/NxntCDAcRn pic.twitter.com/SOyelMZEDC