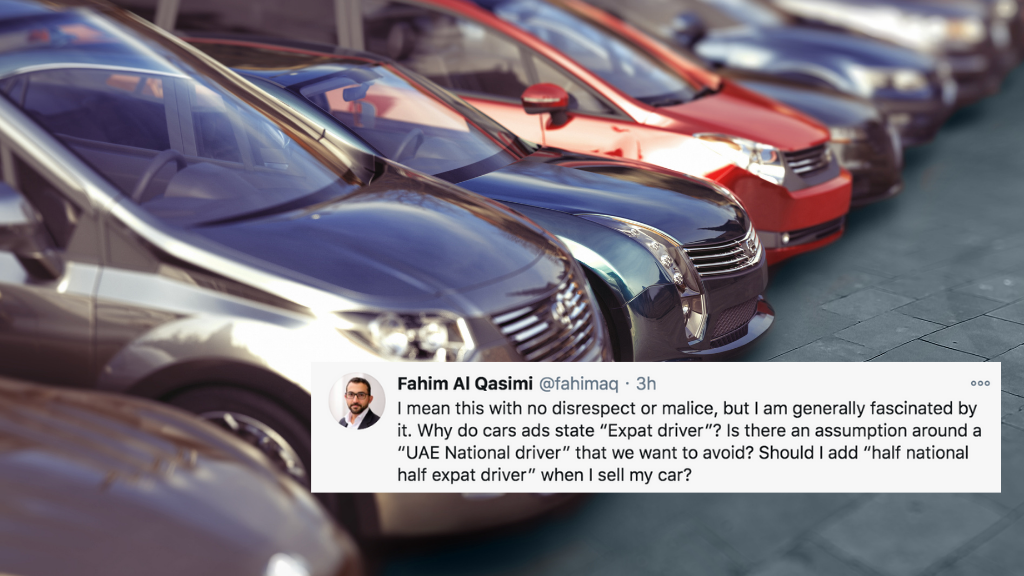 Fahim Al Qasimi is calling out car ads in the UAE after he spotted an ad that read it was owned by an ‘expat driver’… and he’s questioning what it means.

In a Tweet posted yesterday; the prominent Emirati advisor asks whether there is an assumption that if you’re a UAE national driver, your car is less desirable. If you do a quick check on local websites advertising cars, there is a similar pattern, a low-key racism where car sellers suggest certain nationalities are preferred previous car owners.

Sounding genuinely perplexed, Al Qasimi asks, “Should I add “half national half expat driver” when I sell my car?”

I mean this with no disrespect or malice, but I am generally fascinated by it. Why do cars ads state “Expat driver”? Is there an assumption around a “UAE National driver” that we want to avoid? Should I add “half national half expat driver” when I sell my car? pic.twitter.com/JZaBIXSmnm

The internet fed back with a response that suggests, yes, the ads are feeding into stereotypes that certain nationalities maintain cars to a different standard

Was just looking for a car recently and noticed it myself so I asked the people I met when viewing their cars. Apparently they want to show fit in to the stereotype that they unlike an Asian ( Arabs and southeast Asians) didn’t overly abuse and maintained their car well.

The internet agrees there’s a pattern

You’ll regularly spot ads that read, ‘expat owned’. And as Al Qasimi points out, is there something undesirable about being a UAE driver? This is casual racism that needs to be stamped out.

Good point Sheikh Fahim 😊 guess it’s the same as saying it’s lady driven here in the west.. not sure