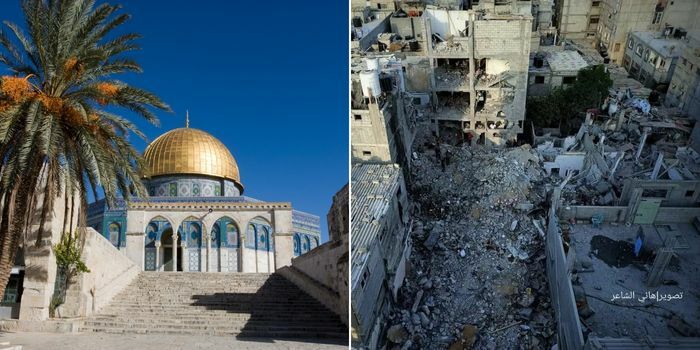 Image on the right via @eye.on.palestine/Hani Al Shayar

The UAE Ministry of Foreign Affairs and International Cooperation (MoFAIC) has issued a statement emphasising the need to restore calm to the Gaza Strip, reduce escalation, and preserve civilian lives.

The statement was issued by Afra Mahash Al Hameli, Director of the Strategic Communications Department at the MoFAIC.

“The UAE expresses its deep concern over the current escalation”

Al Hameli stated that the country was deeply concerned over the current escalation in Gaza. She also advised maximum restraint in order to prevent further violence and instability in the region.

The UAE expresses its deep concern over the current escalation and calls for exercising maximum restraint, to prevent being drawn into new levels of violence and instability.

In line with the UAE’s values of tolerance, Al Hameli further concluded:

The UAE, as a member of the UN Security Council, submitted a request along with China, France, Ireland and Norway to hold a closed meeting of the Council next Monday to discuss the current developments and ways to support international efforts to achieve a comprehensive and just peace.

Tensions have increased between Israel and Palestine in the last few days, causing one of the most violent escalations in the region after the 11- day conflict in May 2021.

According to most recent reports, 28 Palestinians have lost their lives, including six children, a woman and an elderly woman, and 203 civilians have been injured.

ALSO READ: The UAE Reaffirms Solidarity With Palestine After The Recent Attacks