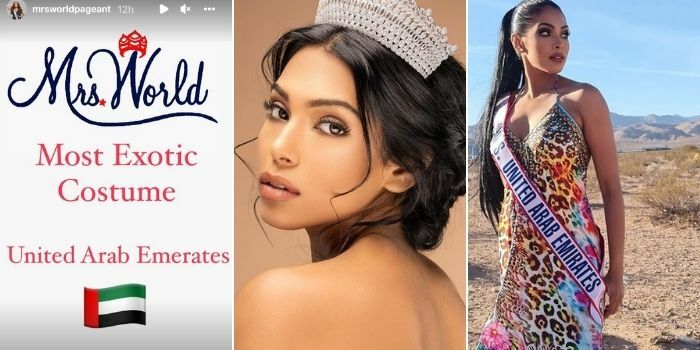 Debanjali Kamstra dazzled at the Mrs World pageant on Saturday! She was representing the UAE for the first time in the pageant’s history and was named second runner-up, just behind Jordan and America.

Just like any pageant, the contestants wear their national costumes, swimwear, eveningwear, and get interviewed to put their public-speaking skills to the test.

Not only did Kamstra win third place, but she was also won ‘Most Exotic Costume’

She absolutely stunned the judges as well as the audience in her award-winning falcon-inspired costume. The whole outfit was made entirely of gold fabric and is tied together with a floor-length feather cape. The headpiece, the huge shoulder pads, everything about this outfit was a 10/10.

What you might not have known about our second runner-up

Debanjali Kamstra is a former employee of Emirates Airlines, and opened her first interior design business in Dubai years ago. She’s been a UAE resident for 13 years and has since opened 2 more companies, one to sell home interiors, and the other that deals with healthy snacks and beverages.

During the interview portion, she spoke about her charitable efforts in the Middle East.

Being the pioneering United Arab Emirates contestant, I’m [for the] first time representing the country in the platform of the world and if I become Mrs World, I will do a lot for the people of determination as I want them to have jobs and I also want to support the children with autism because they are all inclusive.