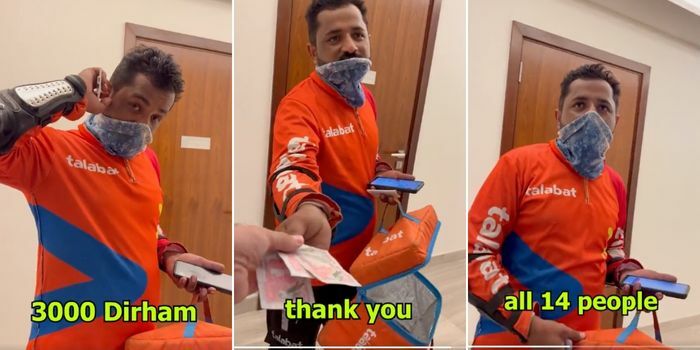 A movie called ‘Pay It Forward’ that dropped in 2000 inspired countless good deeds. A man decides that instead of returning a favour, he will ‘pay it forward’ by doing good deeds for three people, who, in turn, pay it forward with more good deeds. The movie proves how your small gesture could catapult into a global outpouring of good deeds – and it’s inspiring to this day!

And now here it is IRL…

Ahmer Khan shared this video on Twitter. It was originally posted by BARTMANN on TikTok two days ago and it’s already racked up 8 MILLION views! Within the video, a man speaks to a Talabat delivery rider, who shares that he lives in accommodation with 14 people. Collectively, they pay about 3k a month, and he pays approximately AED300 for his share. The man returns to his room and comes back with AED300 cash for the rider. A month’s rent -paid.

Watch till the end: ‘No one has ever become poor by giving’