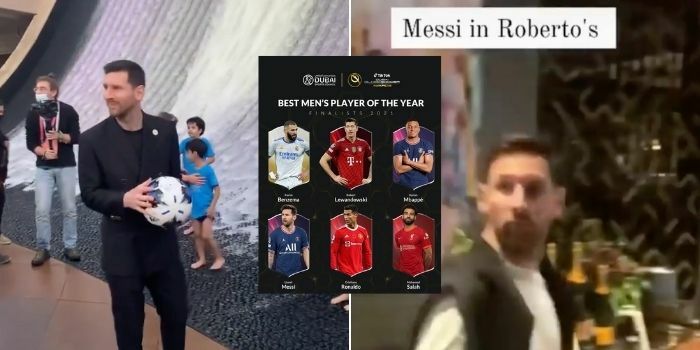 Football legend Lionel Messi has landed in town and his first stop? Expo of course!

Touring the colossal site was no hardship for the incredible athlete, he visited the waterfall and the Argentina Pavilion before visiting a viewpoint to get a 360 view of the whole thing. It’s not yet clear how long the superstar will be in town, but with the Globe Soccer Awards taking place at the end of the month (Messi is a top contender for player of the year), there’s s possibility that he might be here until then.

Messi has landed in Dubai and he’s already making headlines

He was also spotted in DIFC, walking through swanky Italian restaurant Robertos

At Expo, he was in awe of the waterfalls and he visited the Argentina Pavilion

The football legend and Global Ambassador of Expo 2020 Dubai, Lionel Messi was Expo-loring the greatest showcase of human brilliance and achievement.#Expo2020 #Dubai@NouraAlKaabi@uaeatexpo pic.twitter.com/IdETSlBO9h

Barefoot and the best view in the house

The Globe Soccer Awards are happening in Dubai on December 27

1. Best Men’s Player of the Year

2. Best Women’s Player of the Year

3. Best Men’s Club of the Year

4. Best Women’s Club of the Year

5. Best Defender of the Year

6. Best Goalkeeper of the Year

7. Best Coach of the Year

8. Best National Team of the Year

9. Best Agent of the Year

10. Best Sporting Director of the Year

11. TikTok Fans Player of the Year

12. Best Esports Player of the Year