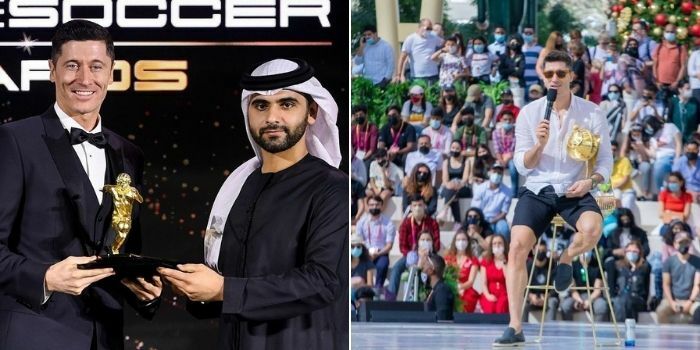 Of course, we all saw the world-class footballers in Dubai last night for the Globe Soccer Awards! We all wish we were invited to see the players get their trophies but the lucky Expo visitors got to see the legendary Robert Lewandowski earlier today.

The Maradona Award-winner gave his interview with the beautiful trophy in hand, saying how humbling the Expo site is

During his interview, Lewandowski was saying how happy he was to see his fans and get to see the Expo site for how glorious it is in person. Later on, he made sure to pass by a couple of pavilions and of course, fans were following!

Let’s talk about last night! Lewandowski, among other talented players, were in Dubai for the Globe Soccer Awards Ceremony at the Armani Hotel Burj Khalifa. And of course, not only did the Bayen Munich superstar win one award, we went home with 2 awards! Other notable wins were Mbappé as the Best Player of the Year, ‏Ronaldinho as the Player Career Award,‏ and Roberto Mancini winning the award of the Best Coach of the Year!

Crowning the winners was His Highness Sheikh Mansoor bin Mohammed bin Rashid Al Maktoum, Chairman of Dubai Sports Council. It was a spectacular night with amazing recognition of the players!