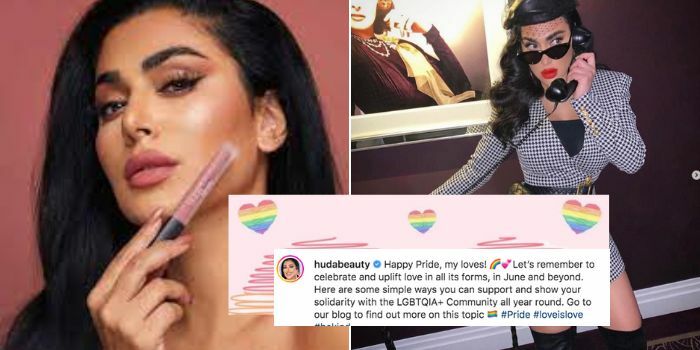 The heat is on Twitter, where some netizens are cancelling the beauty mogul after she posted in support of the LGBTQIA+ movement to her 50 Million strong audience.

Huda wished her followers a happy pride, and reminded people to celebrate and uplift love in all its forms

Happy Pride, my loves! 🌈💕Let’s remember to celebrate and uplift love in all its forms, in June and beyond. Here are some simple ways you can support and show your solidarity with the LGBTQIA+ Community all year round. Go to our blog to find out more on this topic 🏳️‍🌈 #Pride #loveislove #bekind

Comments on the post have been turned off, and Huda added her house rules

She said her page has zero-tolerance policy toward anything hateful, abusive, harassing, indecent, discriminatory or profane and will be deleted.

**If you have nothing nice to say, don’t say anything at all 💕 Huda Beauty is a judgement–free space, where we encourage everyone to be whoever they want to be – no questions asked. That means we have a zero-tolerance policy toward anything hateful, abusive, harassing, indecent, discriminatory or profane and will be deleted. Practice kindness 🙏🏽

LGBTQ+ activity is punishable by law here in the UAE. Posting about it is not. But supporting the controversial movement has disappointed some followers who do not share her opinion.

In case you forgot that you are from Muslim Arabic family, at least you know very well that you are living in a Muslim Arabic country which helped you launch your career and build your fortune, at least respect that! Stop provoking us!#hudabeauty #مقاطعة_منتجات_هدى_بيوتي pic.twitter.com/q5CwIT1alo

Some said posting this is simply unacceptable

So now yall are canceling Huda beauty bc Huda supports LGBTQ+ which is a basic human rights ?!?!?! 😐

The story was covered by Smashi Tv here

The hashtag of boycotting Huda Beauty's products is trending now in the UAE, after Huda Kattan announced her support for LGBTQ on Instagram. Huda has called on followers to support the LGBT community and advocate for their rights.#news #dubai #hudabeauty pic.twitter.com/PLLR7dZHMv

But countries which traditionally support pride, are quietly showing their support in the UAE.

‘Pride Month’ is celebrated in the US to celebrate the LGBTQIA+ movement and other parts of the world follow to host events to celebrate. Last year, for the first time in the UAE, the UK, the US and Spanish embassies raised pride flags.

Consular officers from the respective embassies were seen posing beside the rainbow flag, which is a symbol of the LGBTQ+ community.

And the second year running, on June 1, the USA embassy in UAE shared a post supporting pride which was also met with a mixed response.