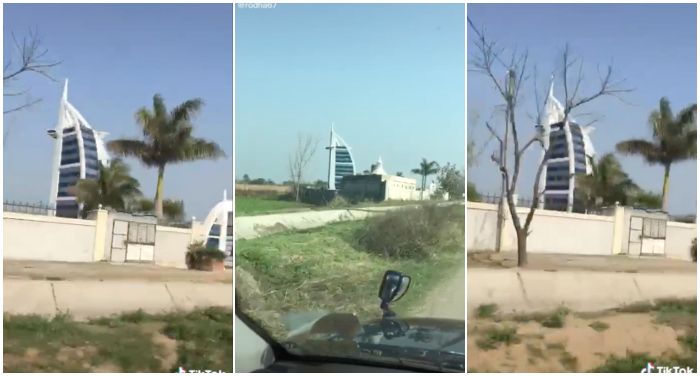 Is it a bird? Is it a plane? No, it’s a restored farmhouse in Punjab that looks just like the Burj Al Arab!

Dubbed, Burj Ali, the tourist attraction is located in Phagwara, some 2,600km away from Dubai, and is the brainchild of architect Rajinder Kumar who reportedly visited the UAE in 2011.

The hotel originally made headlines back in 2015, but it’s getting attention again thanks to a recent TikTok that went viral.

The restored farmhouse is three floors in total and looks just like the iconic Burj Al Arab, one of the world’s most luxurious hotels

The real deal: The Burj Ali looks nice and all, but it ain’t got nothing on this marvel!

Read Next: Drones Will Be Sending Electric Shocks To Clouds To Enhance Rainfall In Dubai

Reports have trickled in stating that the UAE is heavily investing in freshwater supplies as the country has allocated AED55 million into nine ‘rain enhancement’ projects, one of which involves drones and electrocuting clouds.

Trying something very different from cloud seeding, the UAE is attempting to induce rainfall in the region using drones that shoot electricity into clouds.

It’s no secret that the Gulf country already uses cloud-seeding technology, by firing salt into clouds to encourage precipitation however, Brit researchers have been paid AED5.1 million to test how an electric charge on water droplets can develop into rainfall.

This project should considerably help with the amount of rainfall the country receives; due to the fact that the UAE just sees an average rainfall of 100mm per year.