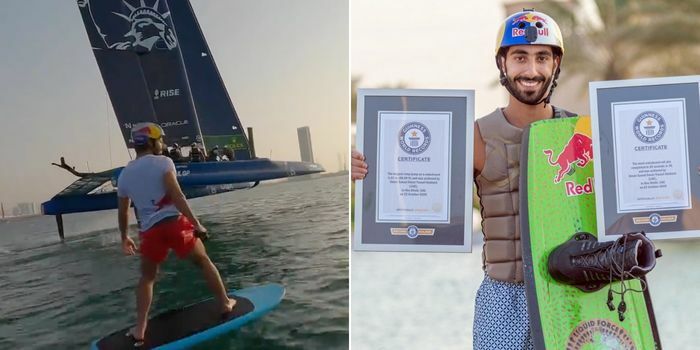 With the UAE’s National Day right around the corner, it’s important not just to showcase the UAE and its incredible approach in terms of infrastructure, economy, leadership and community but to shed light on the many local and international individuals who have helped put the UAE on the map.

Omeir Saeed is the perfect example of another Emirati who is breaking barriers and encouraging other locals in the world of water sports, this time with wakeboarding in particular.

The Abu Dhabi national recently stunned in a jaw-dropping video

Saeed showcased his MAAD wakeboarding skills at the debut of SailGP in Dubai this week.

Don’t believe us? Check the footage out yourself.

According to Saeed’s profile on Red Bull’s official website, his love of wakeboarding and ambition of going pro all began after a friend took him to “the cable for the first time,” adding that he just “kept going back.”

After all, many hobbies-turned-passion begin sporadically, and for the London-born Emirati this was just the beginning of a sight set on a pro career.

Talk about achieving your dreams!

Back in 2020, Saeed shared his accomplishment in an Instagram post saying that the feat had always been a dream of his, adding that “to be able to break not one but two records is a great honour.”

You read that right, he has broken the world record of the farthest wakeboard ramp jump, in the male category and most wakeboard rail airs (or Supermans) in 20 seconds.

In case we haven’t told you yet, he’s also an official Red Bull athlete

So many accomplishments and at such a young age, we cannot wait to see what else is in store for Omeir Saeed

Check out his page here.