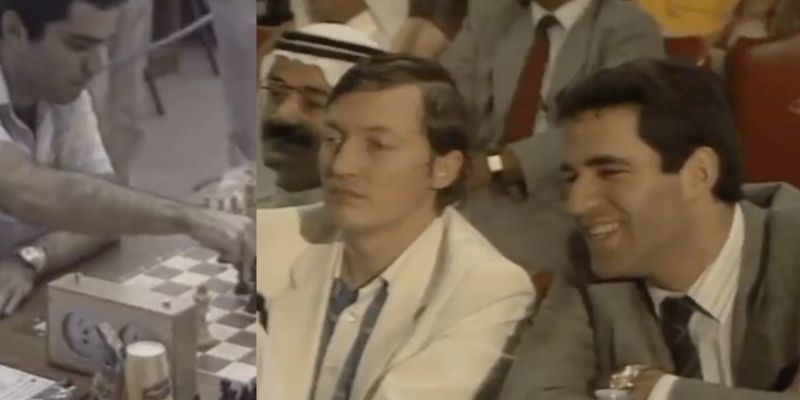 Nostalgia might hit you hard for this one, at least if you were alive during that time. If not, perhaps your parents will. Footage of one of the world’s greatest chess players, Soviet-born Garry Kasparov at a chess tournament in Dubai has resurfaced and it is giving us all the Queen’s Gambit feels.

Known for becoming the world chess champion in 1985, Kasparov was considered the youngest champ at 22 and the FIRST in the world to be defeated by a supercomputer in a competitive match.

Karpov and Kasparov at the opening ceremony of the 27th Chess Olympiad (Dubai, November/December 1986). pic.twitter.com/st9trz7IRo

Gary Kasparov in the final round of the 27th Chess Olympiad that took place in Dubai on December 1, 1986

Ahh, to have seen Dubai and this chess GENIUS during that time.

When Włodzimierz Schmidt resigned to Garry Kasparov in the last round of the 27th Chess Olympiad (Dubai, December 1, 1986), it appeared as if he was ready to give up his house, his car and his bank account too. pic.twitter.com/Zujb4nyJMp

The Lovin Daily: An Indian Businessman Was The Only Passenger Aboard A Flight Back To Dubai

Dubai’s Supreme Committee of Crisis and Disaster Management has announced revised COVID-19 precautionary measures for events and restos throughout Dubai.

All updated measures are to come into effect from today, Monday, May 17. However, wearing a face mask and observing social distancing in public will still be mandatory.

1. Restos being able to seat 10 persons per table

5. Entertainment venues can have increased capacity of 70%

6. Occupancy ceiling of hotels raised to 100%

7. Attendance at wedding events at homes is capped at 30, with compliance to COVID-19 regulations

8. Restaurants are allowed to resume brunches with strict observance of updated precautionary measures outlined by authorities