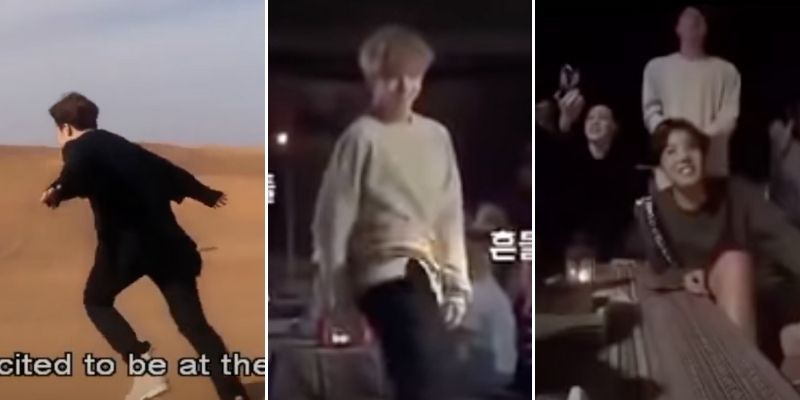 Throwback: A Video Of BTS Members Bellydancing In Dubai Is Going Viral Again

Remember when BTS visited the UAE and their fanbase went gaga? Well, it seems that now and then new footage from that trip will keep resurfacing.

After all, it has been a while since we’ve had the boyband come back to the UAE and all that can be done is to sit and wait patiently and indulge in a few throwback videos.

The latest throwback footage that has made its way here? A bellydancing moment from the band at a Desert Safari in Dubai, of course

The members’ RM, Jin, Suga, J-Hope, Jimin, V, and Jungkook were in Dubai for their summer package special

What’s in a desert safari?

It’s usually a trip to the middle of the desert, among the dunes where you sit and have a traditional Middle Eastern meal, along with live entertainment from a belly dancer and a tanoura (skirt) dancer.

It also really gives tourists the BEST photo-ops in the desert, along with a dune-bash by the professionals and a chance to see camels and falcons in person. In short, it’s a must-do when in Dubai.

Taehyung’s hips most definitely DO not lie!

READ MORE: Flights Between India-Dubai Will Remain Suspended Until July 25

It’s been a long journey since the initial suspension of flights between Dubai-India, leaving everyone asking for updates constantly, completely understandable. Emirates airline’s recent statement is that flights from India, Bangladesh, Pakistan and Sri Lanka will be suspended until July 25.

The airline announced that the suspension of carrying passengers from the select countries came “in line with the UAE government directives” on Sunday via its official website.