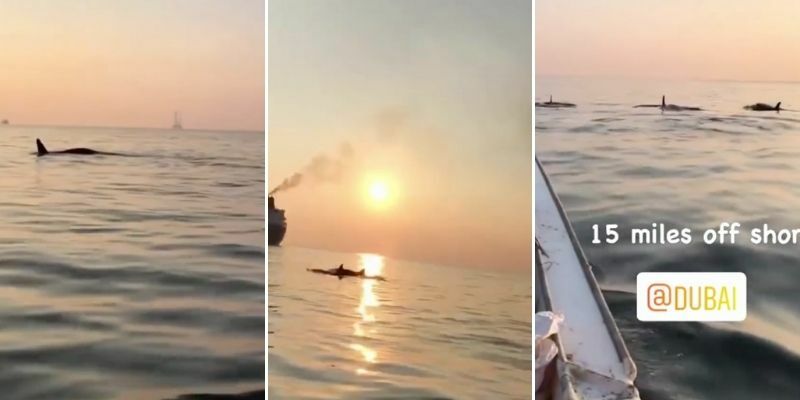 On Friday mornings, most of us get up, head to work and go on about our usual ‘weekdays,’ but that isn’t the case when you’re the Crown Prince of Dubai.

Every day is an adventure, a chance to explore or witness something new, and as we all know His Highness Sheikh Hamdan bin Mohammed bin Rashid Al Maktoum has been making a splash on the ‘gram since he first joined it.

In one of his most recent quests to the sea, the Crown Prince recorded his sighting of orcas, 15 miles from the coast of Dubai on January 14

In fact, the sighting was such a rarity that an academic who is also the founder and director of the UAE Dolphin Project said:

“Thanks to a video shared by Sheikh Hamdan bin Mohammed bin Rashid Al Maktoum, we are now aware of a pod of Killer Whales being sighted this morning (Friday 14th January 2022) about 15 miles from Dubai shores. After studying the video, I can see at least 6 females, one calf and one male. This is an exciting sighting. Killer whales are rare, but they are regularly seen in UAE waters. It is so crucial for the general public to report sightings of whales and dolphins which can be done via the UAE Dolphin Project Initiative website (www.uaedolphinproject.org) Instagram, Facebook or by email at sighting@uaedolphinproject.org.”

– Dr. Ada Natoli, Assistant Professor at the Life and Environmental Sciences Department, College of Natural and Health Science, Zayed University, and founder and director of the UAE Dolphin Project Initiative

READ MORE: This Video Of The Burj Khalifa Launching Into Space Has Gone Viral!

A video production company in Dubai @dxb.movie recently made a clip of the famous Burj Khalifa launching from right at the heart of Downtown Dubai into outer space!

Dubai peeps were thrilled to see the uber-cool video and it received more than 390,000 views! The comment section was delighted to view something straight out of a sci-fi movie. Some of the peeps wanted to be in the Burj Khalifa before lift-off and some thought that the skyscraper was off to relocate to Mars.