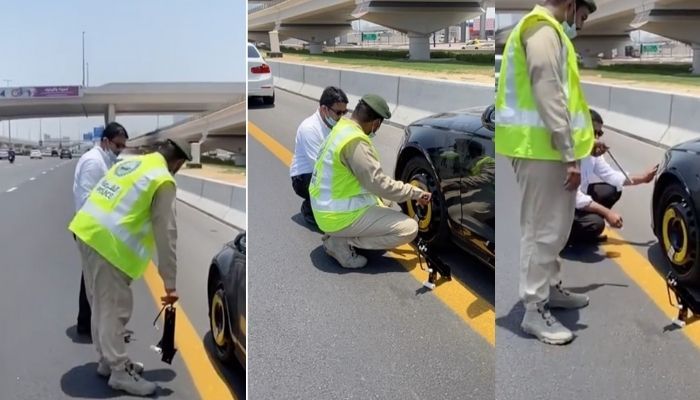 Not All Heroes Wear Capes: A Dubai Police Officer Helps A Motorist Before Friday Prayers

Picture this: you’re driving to your Friday morning prayer and your car gets stuck. Not the greatest start to one’s day. Unless you live in Dubai that is.

Yet another heroic deed by Dubai Police was caught on camera today, after one of the officers was seen helping a man replace his tyre in Sheikh Zayed Road, right before Friday prayers.

There’s never a worry when the Dubai Police is around, seriously one of the best in the world

This country just surprises us every time. From having a full-fledged conversations with a stranger in the elevator to getting your items on discount when you don’t have enough money on you. It’s happened to all of us.

Dubai can appear to be all about going big or going home… or having a big home but it’s the little things that make the expats call it their second home. Things like…

Listen to The Lovin Daily: Al Baik Is Opening In Dubai This Weekend!

READ MORE: Al Baik Is Opening In Dubai This Weekend!

Al Baik is a famous broasted chicken joint from Saudi. When it opened for the first time in Dammam, Saudi, footage of the queues out the door went viral. In 2020 it opened its first restaurant outside of Saudi (in Bahrain) and so, tbh it was only a question of time before it expanded to the UAE. So we can now happily announce Al Baik is opening at a food court in Dubai Mall this weekend.