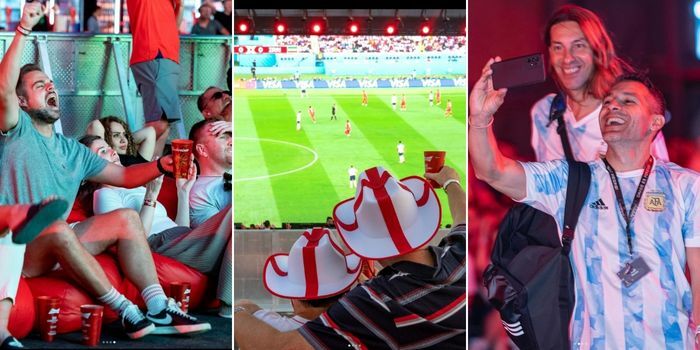 32 nations are competing in one of the most prestigious tournaments in the world, it’s happening in an Arab country for the very first time and it’s right on our doorstep.

The eyes of the world are on Qatar and the infrastructure it put in place to host the FIFA World Cup Qatar 2022. Seven AC-equipped stadiums were built within a 55km radius of Doha, with crowd capacities ranging between 40,000 and 80,000 people, accommodation agencies, and special World Cup visas were introduced for fans. Less attention has been paid to World Cup fever in Dubai, which is expected to attract an additional 1 million visitors before December 18 (1.4 million fans are expected to attend matches in Doha).
Packed fan zones, cheaper accommodation, and Dubai as an attractive tourist destination are just some of the reasons fans are choosing Dubai as their HQ for the World Cup.

Heaps of flights and a guaranteed good time

There are 60 flights between Dubai and Doha daily, so people are opting to spend time between matches right here where the fan zone set up and infrastructure to accommodate a large number of fans is already in place. Dubai has 140,000 hotel rooms versus the 45,000 rooms in Doha, so the competition for budget accommodation is less in Dubai – a win for fans.

Official and unofficial fan zones are well equipped to house the thousands who didn’t get accommodation in Doha. From chill beer gardens, and big screens towering over infinity pools to one of eight official FIFA fan zones in the world (which has its own nightclubs) there are approximately 50 fan zones all catering to a diverse mix of nationalities and the fan energy on the ground from day 1 has been immense.

Dubai is a postcard for fan zones done right

Ahead of the World Cup, Dubai had its infrastructure in place. New public transport schedules were announced and Dubai Police issued a guide for World Cup rules for fans in Dubai, with an emphasis on tolerance for other nationalities, reminding people that this is a nation of tolerance.

While the vast majority of football fans are fun-loving, the sport is well-known for its hooligan culture. We haven’t seen this in Dubai. High emotions, lots of alcohol, and fanaticism can bring aggression and violence to international football events, but so far, the stories from Dubai fanzones (and Doha) have been overwhelmingly positive.

This was the World Cup with the biggest question mark, and Dubai is capitalizing on it in the best way.

While you’re here, check out 17 Epic Fanzones In Dubai To Watch The FIFA World Cup